William Mesny (1842–1919) was born in Jersey, ran off to sea as a deck hand aged 12, and finally wound up at Shanghai in 1860. China was being dismembered by foreign powers and civil war, and amid the chaos Mesny became variously a prisoner of the Taiping rebels, a smuggler, a customs official and an arms dealer. He eventually enlisted as an instructor in the Chinese military where, after five years of fierce campaigning in remote Guizhou province, he rose to the rank of general.

Mesny witnessed many of the period’s brutal conflicts first-hand, from the Taiping, Miao and Muslim rebellions – civil spats responsible for the deaths of over twenty million people – to territorial wars with France, Russia and Japan which saw China lose valuable tributary states. He spoke fluent Chinese, was twice married to Chinese women, and spent twenty-five years orbiting the country between Beijing and Burma, writing opinionated newspapers articles on everything from mining opportunities to local cuisine, ethnic customs, the appalling state of the roads and inns, and the rigours of dealing with petty officialdom.

Having served as an advisor to several prominent officials – including the enthusiastic industrialiser, Zhang Zhidong – Mesny eventually settled down at Shanghai with his second wife and published a magazine about his experiences, Mesny’s Chinese Miscellany, whose four collected volumes comprise a fascinating mosaic of late nineteenth-century China. 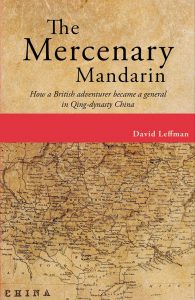 I spent over fifteen years footstepping Mesny’s travels across China, interviewing locals and piecing together his life from contemporary journals, private letters and newspaper articles. My biography of Mesny, The Mercenary Mandarin, was published by Blacksmith Books in 2016; I’ve also set up a Mercenary Mandarin Facebook page, featuring hundreds of photographs, research notes and extracts from the book that didn’t make it to the final version.

My interest in Mesny continues: if you have any comments or fresh information about his life, please get in touch via the contact form.