In 1894, China and Japan went to war over control of Korea. China had long claimed Korea as a client kingdom, while a recently-industrialised Japan wanted unfettered access to the peninsula’s mineral deposits – not to mention the chance of occupying territory right on China’s northeastern doorstep.

Skipping the details, China lost the war – both its armies and northern navy were convincingly beaten – and the settlement included not just ceding control of Korea, but also handing Japan part of northeastern China, plus the island of Taiwan.

The Taiwanese, infuriated at being abandoned by mainland China, declared independence and vowed to fight any Japanese attempts to land on the island. A defence force formed under the Chinese governor, Tang Jingsong, and his protégé Liu Yongfu (劉永福), former leader of the Black Flag militia which ten years earlier had fought for the Chinese against the French occupation of northern Vietnam. 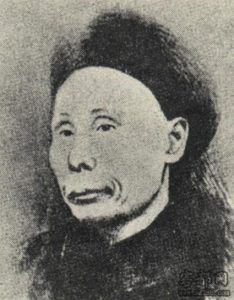 Resistance, however, was fairly brief. Tang fled Taiwan soon after the Japanese landed in mid-1895, while Liu put up a token struggle before he too was forced to flee, narrowly evading capture by dressing as a woman and escaping aboard a British-registered vessel.

Unhampered by the facts, a whole series of Chinese propaganda woodblock prints were published through the war, generally showing the Japanese getting mightily beaten. Here’s one titled “The Japanese Occupy the Korean Capital”, in the British Museum collection: 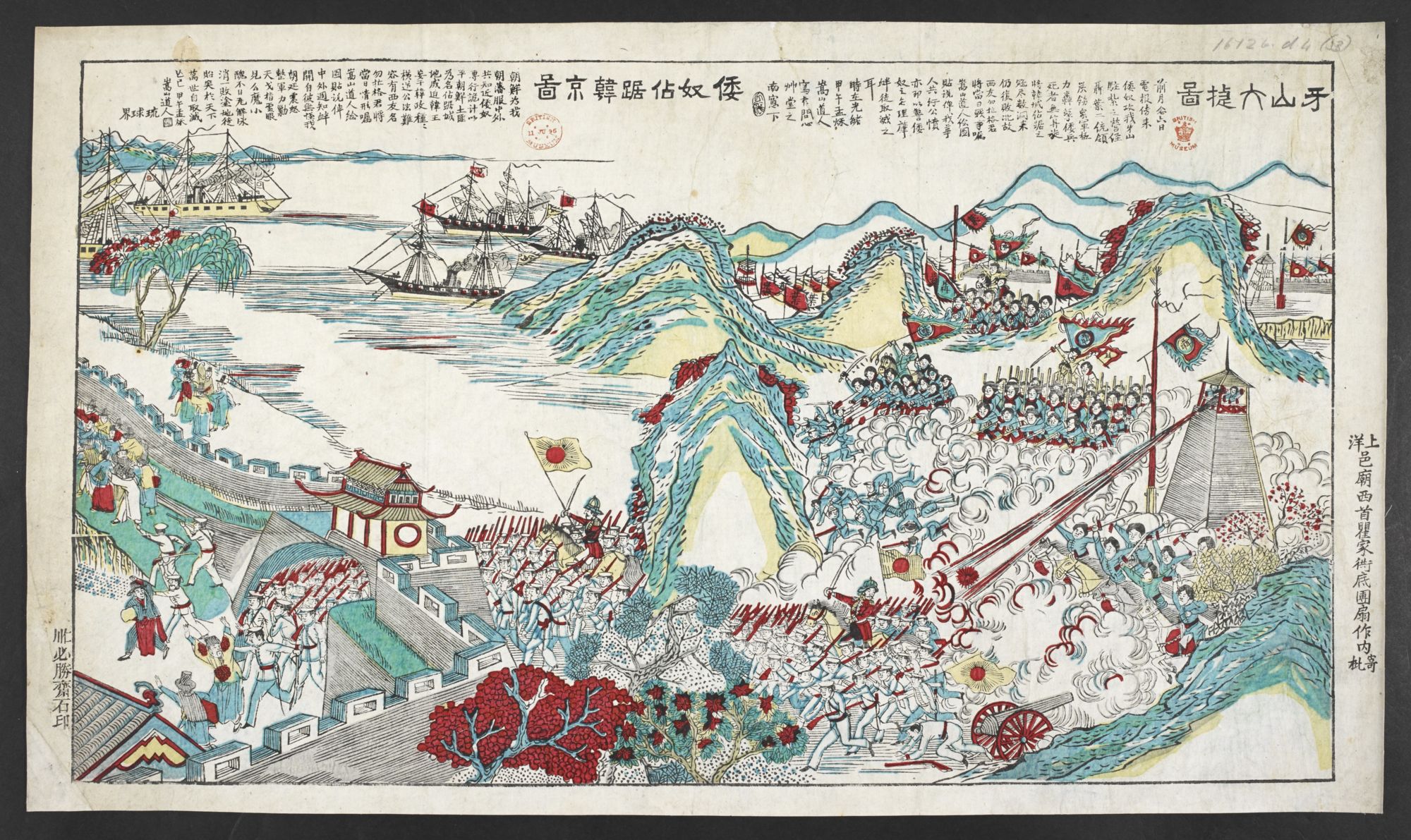 The Japanese and Chinese navies are about to engage top left, while in the foreground Japanese troops are pouring in through the city gates as Korean officials, wearing their distinct headgear, run off lower left in confusion. But Chinese forces are right behind the Japanese, harrying them with canon right up to the city walls.

A few months later the action had shifted from Korea to Taiwan, and the same woodblock – subtly altered and retitled “Liu Yongfu’s Black Flags Defend Taiwan: Victory by Land and Water” – was republished: 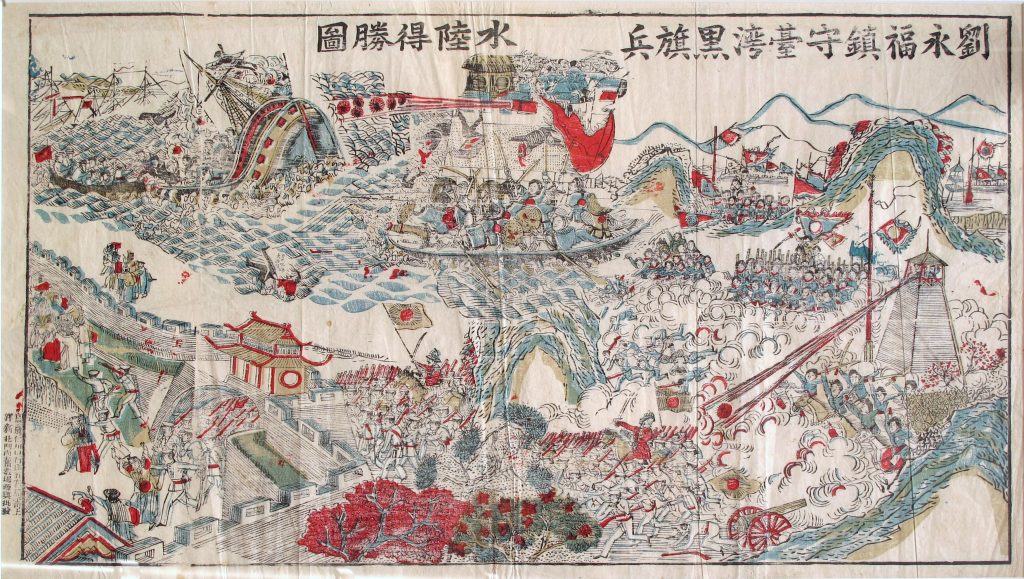 Now the top-left corner shows a Japanese warship being sunk by a clifftop battery (though in a slight oversight the officials in the lower left corner still have their Korean uniforms), while the Japanese land forces appear to be hemmed in for the slaughter. None of this ever happened. 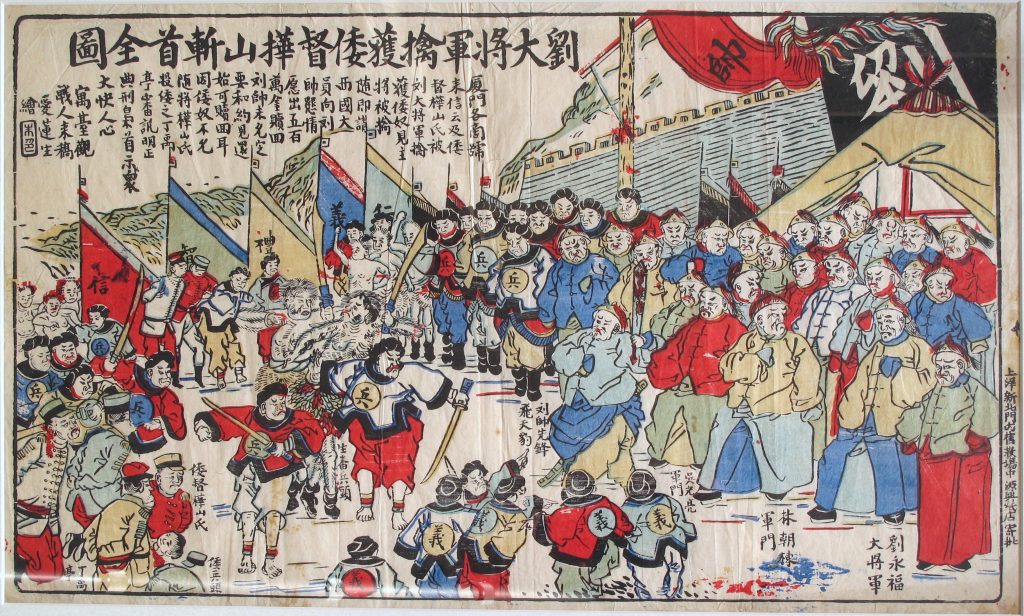 Surrounded by his generals and below a black banner reading “Liu”, Liu Yongfu sits front right wearing a yellow jacket. Japanese prisoners – including Sukenori in red and a man having his head cut off – are huddled together in the lower left corner. A group of hairy, half-naked Taiwanese aborigines, who have been helping the Chinese, wave their broadswords in the air. 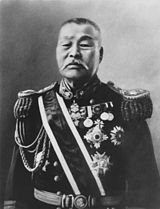