We hadn’t wanted to go to Seda. I doubt anybody does, unless they’re a monk studying at the enormous lamasery there, the largest in western Sichuan. But things had gone astray at the bus station in Ma’erkang, where the staff had refused to tell me whether there was a bus through to the monastery town of Ganzi, hundreds of kilometres further west. Stupidly, I had tried a direct “Is there a bus to Ganzi?” on the woman at the ticket window. In China, it rarely pays to be too blunt with questions because nobody hands out information – even people being paid to do so at a government-run bus station – until they’ve worked out why you’re asking. Partly, this is down to a worry that somehow the information might be used against them, so questions need to be phrased to allow loopholes in the answers. “How do I get to Ganzi?” would have been better, leaving room for some conversational give-and-take, an exploration of my motives, which might have ended in the ticket being sold. Or, if there wasn’t a bus, at least with a ride to some mid-point town along the way.

I suspect simple bloody-mindedness played a part too. It was a cold day and the woman wanted me to sod off quickly so she could rejoin her friends over tea and knitting in the heated back room. She worked for a fixed wage and wasn’t going to get a bonus for doing her job, let alone for being helpful. “Don’t have” she snapped, and turned to go. Knowing that once she left the window I’d never be able to call her back, I tried a desperate “Well, what about here then?” She glanced at my road atlas. “Seda? Yes, there’s a bus to Seda. Two tickets, right?” At the time I thought she was smiling, happy to be wrapping up her business with me. I realise now that it was a smirk. She’s probably still laughing about selling me those tickets.

Smirk or smile, the journey started well. The bus was old but at least the engine was lively, the seats all padded and the windows intact. The passengers included a group of young Tibetan monks in red robes, who were off to study at Seda. Part of Tibetan Buddhism is about gaining merit through prayer, which helps you to be reborn higher up the incarnation ladder in the next life. One way to pray is by circuiting clockwise around holy buildings. Usually this is done on foot, but our driver spun the bus around a chorten on the outskirts of Ma’erkang, generously providing all his passengers with effortless spiritual maintenance. Or was he asking for protection against the doubtless terrible road conditions ahead? Either way, the monks cheered and hurled handfuls of paper prayer flags out the windows – another meritorious deed – filling the moment with good humour.

The road turned out to be surprisingly sound, climbing unbroken up river valleys onto the edge of the high and airless Qinghai Plateau. At one point it ran alongside the Dadu River, which I had last seen way to the south at Luding. Here it was a noisy stream; there it had been a menacing, muddy brown torrent tearing through a deep gorge. In 1935, Mao Zedong and the communist Long Marchers only managed to cross the Dadu by climbing hand-over-hand along the chains of Luding’s four-hundred-year-old suspension bridge, while the Nationalist forces on the far side shot at them. Their success was so unlikely that it turned the communists – who, at the time, were just one of many rebel forces in China – into high-profile heroes. This would never have happened if they’d come as far north as we did. They would have simply waded unheroically across the river, and been forgotten.

A growing unease that we seemed to be heading too far to the northwest turned to panic as the bus trundled into Seda: there was no town, just rubble. Admittedly, this isn’t such an unusual sight in China where, if local authorities wish to modernise, entire neighbourhoods can wake up to find 拆, the character for “demolish” daubed on their front doors and the bulldozers moving in. But it’s not a welcome sight either, whether you’re a Beijing homeowner or have just spent eight hours on gravel roads in a bus with no suspension. Seda’s street plan was still picked out by uneven, hastily-built walls, but sledgehammers had reduced its buildings to a debris of smashed bricks and timbers scattered across the gravel plain. Amongst the ruins a single street of shacks ended at what looked like the only surviving permanent structure, a two-storey concrete blockhouse. This turned out to be the hotel, whose facilities ran to six empty cells without running water.

Nor was there any joy in locating onwards transport. “Nothing until tomorrow” was the consensus, “if then” added the town’s sole restauranteur, a cynical Muslim who sold spicy noodle soup out of one of the shacks. The other thing everyone agreed on was that there was no bus direct to Ganzi because, whatever my map said, there was no road. A long conversation with a sympathetic night watchman and his wife, however, revealed that there was a daily bus to Luhuo, a market town 100km southwest. This, they assured me, sat on a real road to Ganzi, with real buses. No, there was nowhere in Seda to buy tickets – you just turned up before the bus left at 4.30am and paid the driver. Or was it 5.30am? Anyway, don’t be late because it’s first come, first served.

By now the afternoon was almost over and, with an early start the next morning, we had little time to explore whatever it was Seda might have to offer. On the positive side, there wasn’t much of the town left to explore anyway. The only prominent landmark was the chorten on Seda’s outskirts, so we walked off towards that. This proved unexpectedly difficult. Altitude and dogs are the bane of anyone wandering about in the Tibetan world. “Tibet” was originally a far bigger place than it appears on a modern map. What was eastern Tibet is now enclosed by adjacent areas of the Chinese provinces of Sichuan, Yunnan and Qinghai. These mountainous areas remain ethnically Tibetan, peopled by the rough and very tough Khampa, horsemen and yak herders who sport braided hair and chunky jewellery made of amber, coral and turquoise. They also breed savage Tibetan mastiffs, which they keep as guard dogs and sell to Chinese enthusiasts for vast amounts of money.

Seda’s dogs were a less threatening pack of mongrels, easily scattered by a handful of stones but still a worry. Even without them, the 3500m altitude made the two-kilometre walk along a flat road tiring enough. And we never quite reached the chorten. As we approached it, a young Khampa man drew up alongside on a brightly ribboned motorbike, a vehicle which, along with four-wheel drives, is replacing the more temperamental horse as fast as dealers can sell them. Not being Chinese, he came straight to the point. We were foreigners, right? Could I write English? Did I know about wenshen? I pulled out my dictionary. Tattoo. Could I give him a tattoo? No? He seemed astounded, as if all the Westerners he’d previously met had been tattoo artists. Well then, could I at least draw the design for him, and he’d find someone else to do the needlework? OK. He cheered up. 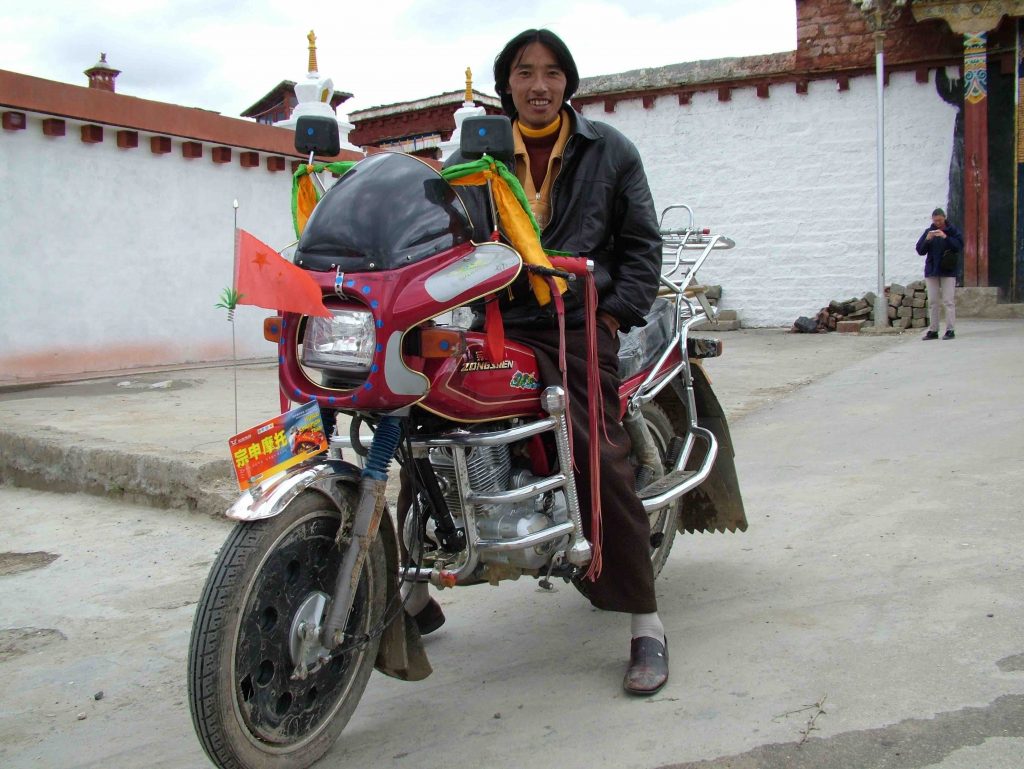 We followed him off the road to a building that had escaped demolition but which needed it. A badge over the main gate indicated a police barracks. Cracked concrete walls let in rainwater and the bare interior was streaked in mud and mildew. There was no insulation and it must have been an appalling place in winter, when outside temperatures drop to thirty below. His dorm was tiny, with just enough room for two bunks. Pulling the thick layer of blankets off one revealed a startled, naked woman. She pulled the blankets back and glared at him. He spoke to her in Tibetan and she stuck out her arm, revealing a home-made tattoo of a lightening bolt with letters either side, meaningless to me. The man rolled up his sleeve, handed me a biro and smiled. “The same as that”. Cute. It’s probably the only time I’ll be asked to draw a sweetheart’s tattoo. I hope I did a good job.

The rest of our stay was less romantic. Along with headaches and fatigue, high altitude makes sleeping difficult, which is good only if you need to get up at 4.15am to catch a bus. However, wandering around a wet, dishevelled Tibetan town before dawn brings its own hazards – namely more dogs and deep, muddy trenches across the path. Fortunately, my scuba torch dealt with both. Being waterproof it’s good for travel and, as it takes six size “B” batteries, it’s also heavy enough to convincingly belt aggressive animals across the muzzle. Of course the bus compound didn’t open until 5am and the half-empty bus left an hour later. But down below in Luhuo the sun was out, there was reliable transport to Ganzi, and a restaurant served late breakfasts of soup with fried rice crusts – my favourite.