A sunny market day in Chong’an: chaos. Narrow streets crammed with diminutive but solidly built Miao grandmothers dressed in dark blue with frilled tea-towel turbans, grandchildren strapped to their backs in quilted pads. Some of the babies also wore “tiger” hats, complete with silver icons and tufted ears, to ward off bad luck. The grandmothers were no respecters of age or rank, forcing a path through the throng by jabbing their elbows into the kidneys of anyone who got in their way. Younger women shouldered carrypoles hung with bundles of vegetables, piles of cloth, braces of live chickens; men stood idle at the edges of the crowd, fondling their fighting cockerels. These were fearsome creatures, knee-height, scarred, muscular bundles of ragged ferocity, with their red heads pecked clean of feathers and killer gleams in their eyes. Even cruising packs of village dogs, on the lookout for scraps, gave them a wide berth. Miao pitch these specially-bred roosters against each other for short, violent bouts that the owners end by separating the birds; the Miao don’t tie razors to the leg spurs, as elsewhere in southeast Asia. Cock fighting isn’t a Miao tradition – they use buffalo – and was only fairly recently introduced by Chinese settlers. 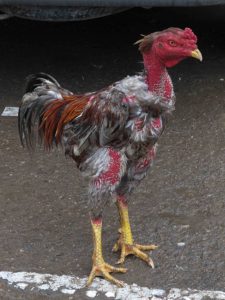 The grandmothers set up in one corner of the market, dyeing clothing in huge woks of boiling indigo and hawking their home-made embroideries from rickety wooden stalls. Chong’an designs are very dark, a strip of blue-black cloth finely cross-stitched in red, orange and white geometric patterns. In the old days, skill with a needle and thread was one of the things that won Miao girls a husband, and they could spend years embroidering the 30cm-square silk sleeve panels which adorned their festival jackets. Now they simply buy the panels. Even home-stitched pieces are becoming rare, replaced by machine-made factory designs. 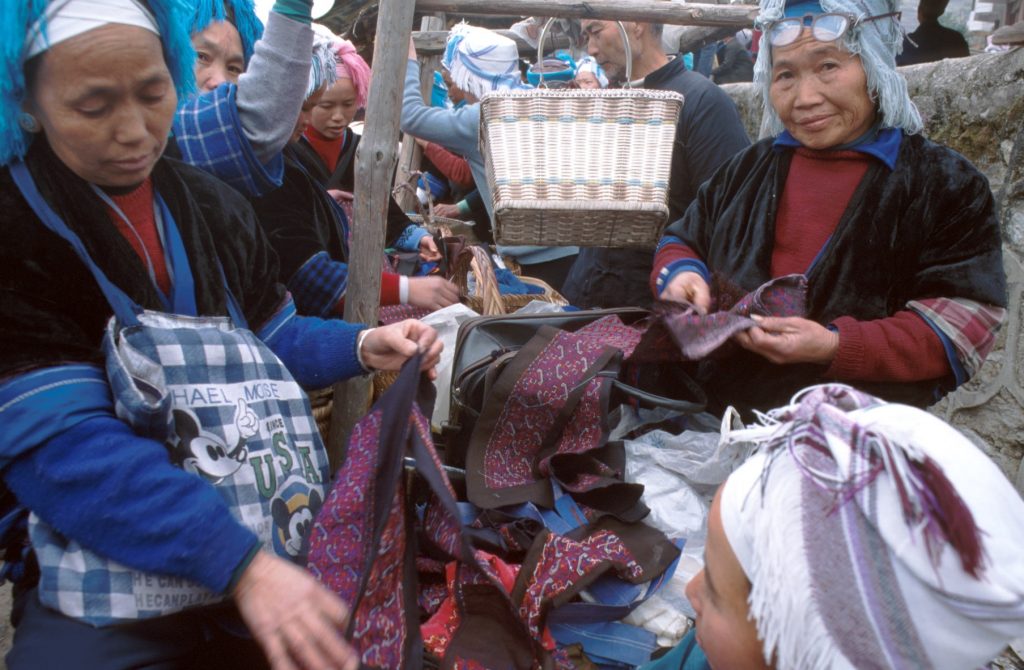 On May 3, 1869 – the same day that the Hunan Army was ambushed at Huangpiao – Mesny and the Sichuan Army were storming Miao stockades on the heights at Tiekuang Po, the “Iron-mine Hills”, above Chong’an. Nobody we met knew of a Tiekuang Po, but there was a similar-sounding settlement called Tiechang Po – “Iron-factory Hills” – about 10km east on the road to Wengping. It sounded a likely candidate. Up we went in a minibus, the road twisting through an uncharacteristically hot and dry countryside, a van ahead of us with a tannoy warning people not to slash and burn or start fires during the Qingming festival, on pain of a heavy fine.

Tiechang (which locals did indeed pronounce “Tiekuang”) was a small cluster of brick houses right on the crest of a ridge, beyond which rose a distinctively pointy hill – Tiekuang Po. A red patch at one corner marked the iron ore workings. Mr Li quickly ran to earth the two oldest men to interrogate, but both proved shy and evasive, denying any knowledge of the old days. A battlefield? They had never heard of a battle here. With all the farming around about, people would surely have found bones and weapons. Anyway, the village wasn’t that old, perhaps nobody lived here back in 1869. 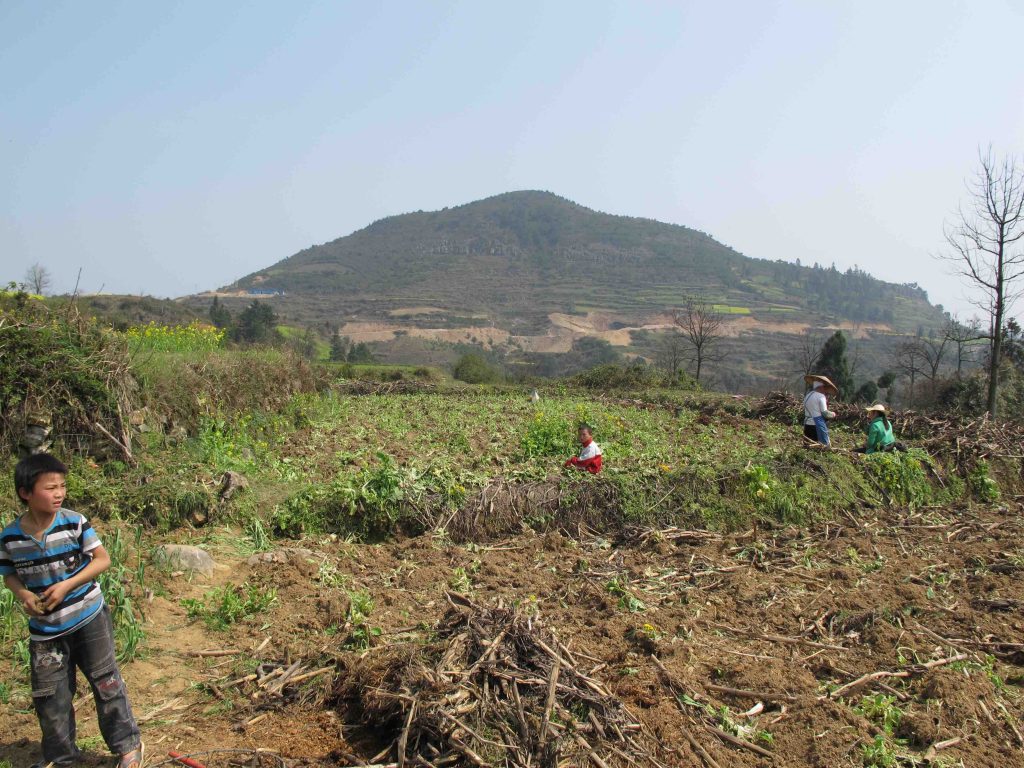 Even before the villagers’ denials, Mister Li had doubted Mesny’s first-hand account of the fighting. He was nothing better than an arms instructor, so why on earth would he have risked his life on the battlefield? Probably he sat safe in Chong’an and heard stories about the campaign from returning soldiers. And anyway, had there even been a battle at Tiekuang Po? Everyone in the military at the time exaggerated their achievements to gain glory, so if the Chinese really had won a victory, why didn’t locals know about it? Tiekuang Po wasn’t even mentioned in the official histories of the war.

Short of finding evidence of the struggle, there was no way to answer Mr Li’s questions. Mesny might well have exaggerated his involvement: in his newspaper articles, written at the time, he makes no mention of Tiekuang Po, and the account in the Miscellany – written thirty years later – is sometimes vague and confused. But there seemed no need to invent a battle in order to puff up his status, when he had clearly been present at so many others anyway.

We walked across to the pointy hill, close to the iron mines. The view down from here was of a large, wedding-cake-shaped bluff ringed with cliffs; isolated columns of smoke rose from distant bushfires. Mister Li had thoughtfully brought along a compass and map and now located Ma’an Shan, where the Hunan Army had been going to light their signal fires, before they were all slaughtered at Huangpiao. It all seemed to fit Mesny’s description of the battlefield’s location. 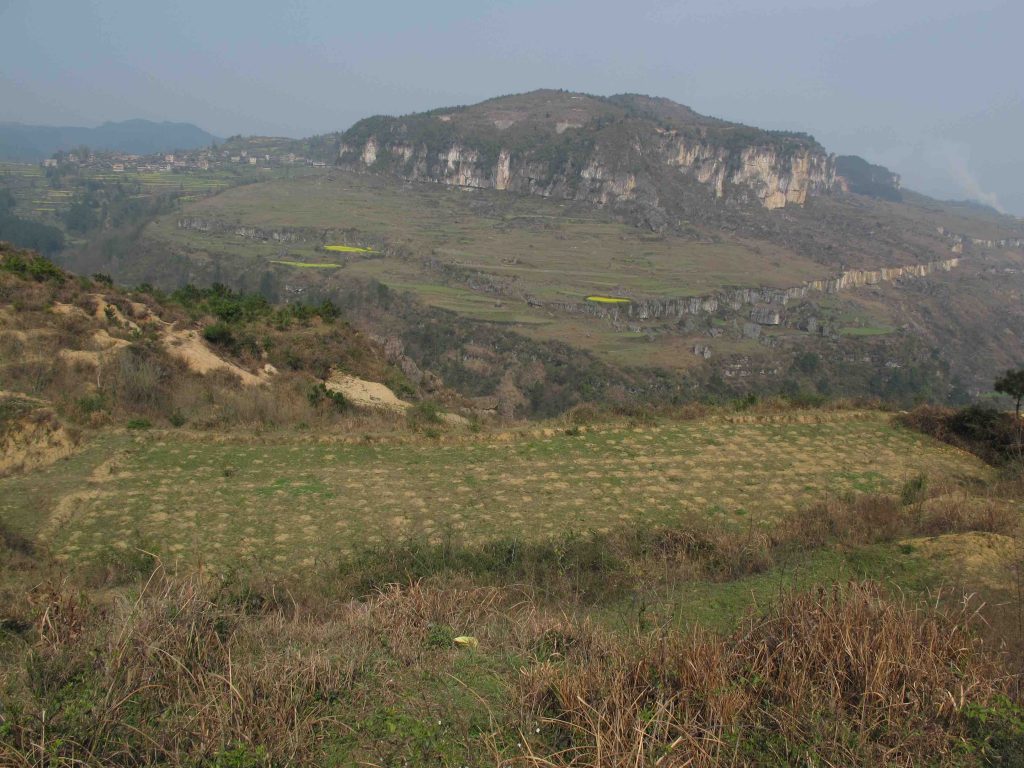