Back in June 2016, I was a bit stunned to find this huge, woodblock-printed world map (坤與全圖) hanging up at an antiques stall in Beijing. It wasn’t for sale, and it took me some time to sweet-talk them around the “no photographs” sign (in fact they only let me take this picture because the quality of my ipod camera is so bad). 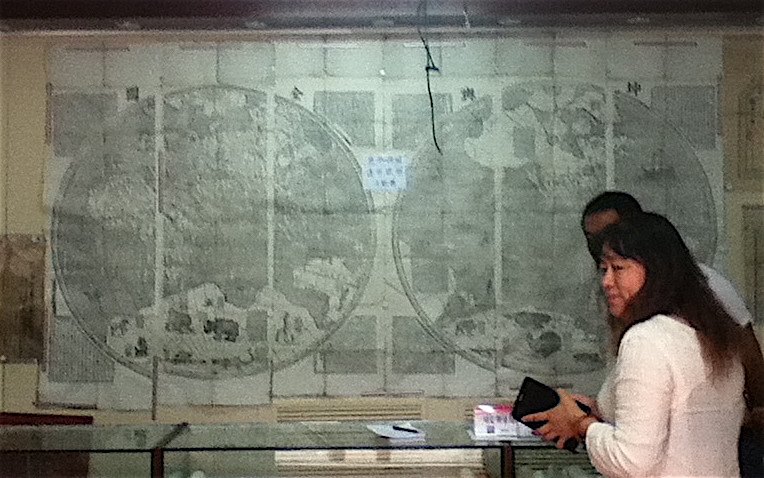 It’s printed in six separate, vertical strips, and measures around 2m x 4m. The original version dates to 1674 and was made by the polymath Jesuit priest Ferdinand Verbiest. A clue to the map’s date are that Tasmania and New Guinea are still shown joined to the Australian mainland – here called “新阿蘭地亞”, xin xi lan di ya, or New Holland – and that western Australia is well-defined but the eastern coast is very vague, definitely pre-dating Cook’s voyage of 1770. Not that this example is so old: it’s either a nineteenth-century version printed at Guangzhou, or a 1930s edition from Korea. Altogether, only eleven other copies of the map are known. Or is it closer to twenty? Everyone disagrees. Incidentally, Verbiest was also responsible for designing several of the extraordinary bronze instruments on the roof of Beijing’s Astronomical Observatory. 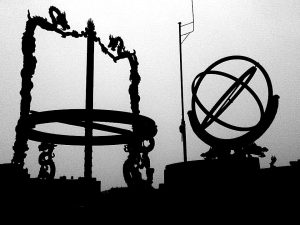 And the connection with Mesny? Because incredibly enough he and Gill saw a copy of this same map, sea monsters and all, hanging up at Wuhou Ci, a memorial hall outside of Chengdu, in 1877. To quote from Gill’s diaries:

“In this temple hanging against a wall was a large map of the world on which was written that it had been made by a Frenchman. This was one of the early Jesuits about 200 years ago – everything is written in Chinese and it has the quaint pictures of full rigged ships – dolphins spouting and fish swimming in the sea while in the savage countries are representations of all kinds of uncouth monsters, but what is remarkable about it is that there are 2 great lakes shewn in equatorial Africa, and this shows that Burton Speke and Grant instead of being original discoverers only found out what was known to the old Jesuits, though this knowledge appears to have been subsequently lost. I have heard before of rumours of a map of this kind but was somewhat startled to find it on the walls of a temple in Cheng Tu. Mesny tried to buy this map and the old man in charge promised to [let him] buy it tomorrow but I doubt that he will do it.”