In late 1870, General Zhou Dawu (周达武) was made commander-in-chief for military operations in Guizhou, and went on to supress the various Miao and Muslim uprisings in the province. Zhou appointed Mesny “Provincial Superintendent of Foreign Arms”, paid for the suspension bridge designed by Mesny that still spans a small gorge just west of at Chong’an town, and later took Mesny and his wife along for a visit to the Sichuan capital, Chengdu. Zhou was also a renowned calligrapher. 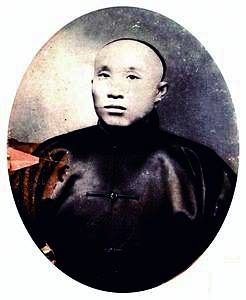 In 2010 I visited Doutuan Shan in Sichuan. The mountain had been hit by the terrible earthquake two years earlier and all its temples were completely destroyed. However, a stone tablet carved with the character for “tiger”, caught my eye as one of the few old things still left standing. Much later, I was going through my photos and noticed the similarity of this stele to a famous piece of brushwork that I’d since seen by Zhou – and looking closely at the stone tablet, there’s his name, 周達武, the last three characters on the lower left side. I had never heard of Zhou, or knew about his connection to Mesny, when I took the picture. 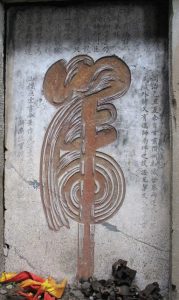 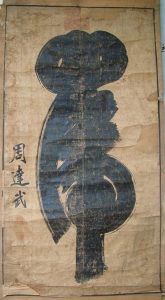