My whole interest in Asia began with studying woodblock printing while I was still at school – I even ended up carving blocks myself – so here’s the first in a few posts about China’s woodblock printing tradition, focusing on current centres for the craft.

A century ago, probably every small town in China had a studio shop run by a family of artisans, where woodblocks were hand-cut, printed in their thousands and sold. Today, Zhuxian – a small market town in Henan, about 15km southwest of China’s Song-dynasty capital, Kaifeng – is one of the few places continuing the tradition, though even here there’s been a decline over the last decade.

Here are tools of the trade: thick, soupy ink in a tub at the back; a stubby, conical bamboo brush used for inking the block; the pad for rubbing the back of the paper; the woodblock; and a partially-finished print. A separate woodblock is used for each colour – the one here is for the red parts of the print – and are aligned over the existing image by the printer’s judgement. Good eye needed. 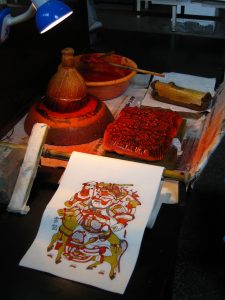 In 2007, I was lucky to be in Kaifeng when one of Zhuxian’s studios was holding a workshop at the museum. You could watch the whole printing process, and even have a go yourself: 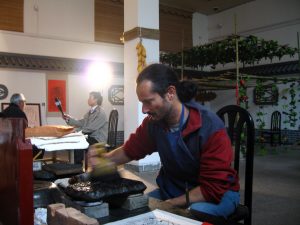 Paper on, and the ink transferred to the paper by rubbing the back with a pad… 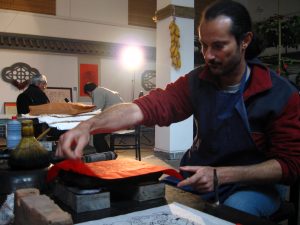 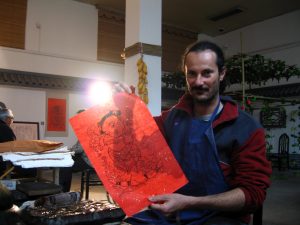