Another few nianhua woodblock prints from Zhuxian. The first is one of those that you just have to be a local to understand. I was told the title is “Flying Bear Exits the Drapes”, but beyond that you’ll have to make up your own story: 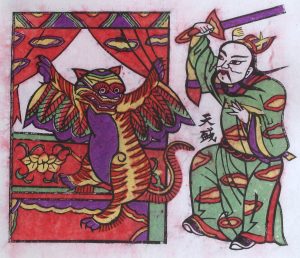 The tale behind this next one, “Jiulong Mountain”, would be fairly familiar to many Chinese; it’s an episode from the life of Yue Fei, seen here on the left. Yue Fei was a patriotic general during the late Song dynasty, when the Chinese capital was at nearby Kaifeng, hence the local connection. Falsely accused of treason and executed by a gullible emperor (though posthumously rehabilitated), Yue Fei is held to embody the spirit of loyalty. 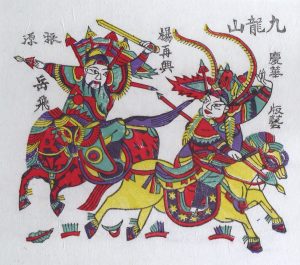 And finally, something for the forthcoming Chinese New Year of the Rooster. Again, a local design rife with good-luck implications – the word for chicken, ji, sounds similar to both “good fortune” and “prosperity”. There’s also the ruyi wishing wand, and those yellow spheres at lower right are meant to be pineapples, symbolising “abundant profits”. 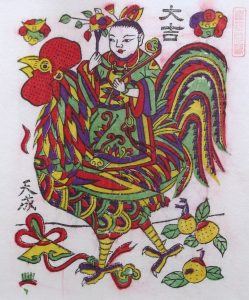