In early May, 1869, Mesny and the Sichuan Army were busy storming Miao fortifications on the heights of Tiekuang Po near Chong’an. On the same day, another battle was going between Miao forces and the Hunan Army some 20km to the northeast at Huangpiao (or Pekuo as it’s called locally), a narrow plateau with steep cliffs dropping into the valley below. The plan had been for the two Chinese armies to work together in breaking local centres of resistance, then circle in towards each other, trapping any fleeing Miao. While the Sichuan Army won their skirmish, things didn’t go well for the Hunan Army at Huangpiao. 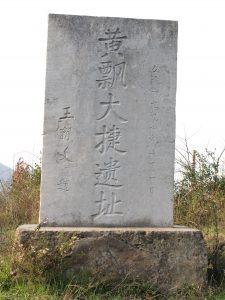 Mr Li Maoqing and myself visited the Huangpiao battle site in April 2012 as part of research for The Mercenary Mandarin. The minibus dropped us off on the roadside beneath an embankment, on top of which stood a large stone slab engraved with the characters for “Site of the Great Victory at Huangpiao”, with an account of the battle carved on the back. A weatherbeaten pavilion from the 1990s stood nearby, listing the names of overseas Miao who had contributed to the monument. A path led down through rough scrub to where the evening sun was slanting across the fields. It was all very peaceful. We walked over to where two farmers were puffing on cheroots and minding their cattle, whose wooden bells clonked in the background as we chatted. One of the men, Wu Guomin from Tuan Cang village, a short way east, gave us the Miao version of the battle: 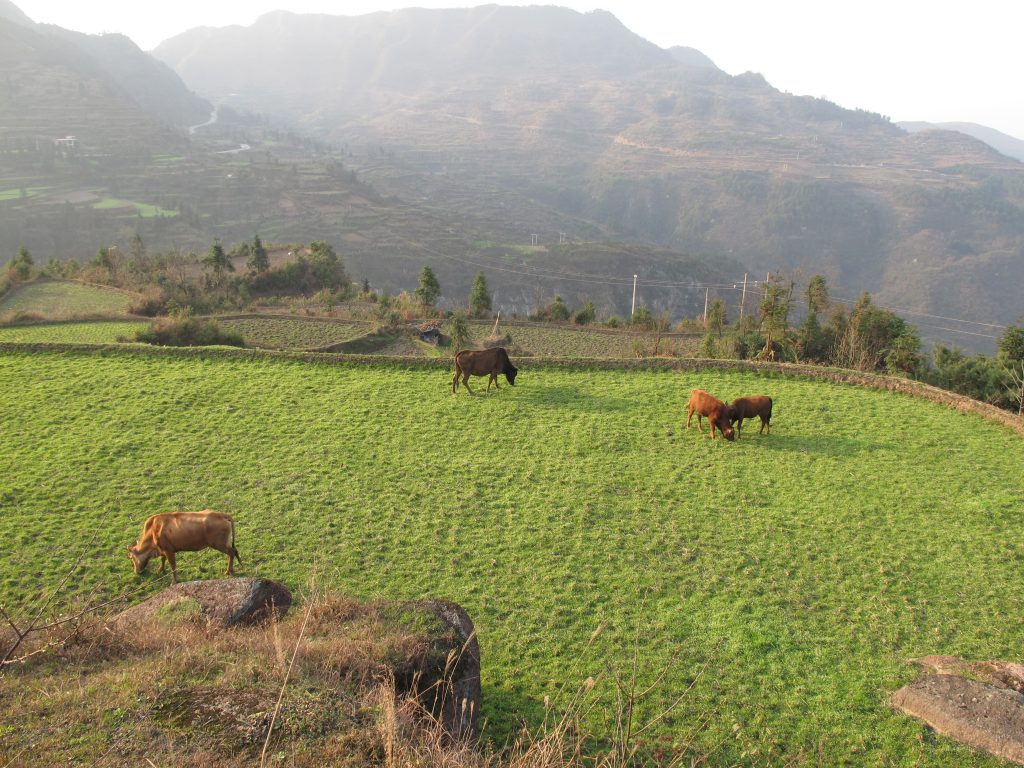 “After eighteen years of chaos, the Chinese army came from the east, from the direction of Wulong district; Huangpiao was on the old path between Wulong and Jiuzhou. Miao forces gathered on the ridge at Huangpiao. Bao Dadu [“Big Belly” Bao] was there, with Zhang Xiumei and some others. When the Chinese came, they suddenly saw hundreds of Miao banners fringing the hills; the Miao came down from two directions and pushed the Chinese to the top of the cliff as if they were herding ducks. Many people died down there, by that outcrop, and down in front”. Since then, villagers had found many arrowheads scattered around the site, the Chinese ones two inches long; both Chinese and Miao had used them, also guns. Mr Wu, who like many local Miao was only around 5ft tall, wagged his cheroot at me. “Other people found whole skeletons when they were digging or cutting grass, tall men with leg and arm bones even bigger than yours!” When fresh Chinese forces arrived for revenge, the Miao hid in a cave to the northeast, halfway up a cliff so that they couldn’t be reached. The Chinese tried to smoke them out but couldn’t, so they left. “I don’t know how many times the Chinese chased us, but they never got into that cave”. 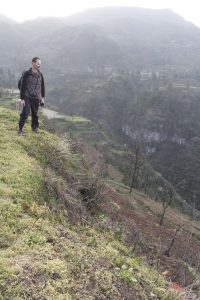 Chinese histories flesh out Mister Wu’s account. Xi Baotian, the Hunan Army commander, was advised against trying to storm Huangpiao, as it was well-defended and the Chinese supply lines were already stretched. But General Long Weishan, a giant renowned for his bravery, laughed at Xi’s timidity: the Miao would be easy to beat, and taking Huangpiao would be as simple as cutting bamboo with a sword. Won over by Long Weishan’s audacity, Xi Baotian sent him off to Huangpiao with 3000 troops. But then he had second thoughts and belatedly ordered 15,500 soldiers under three other generals – Su Yuanchun, Deng Zihuan and Huang Runcang – to follow Long and ensure victory.

Long Weishan reached Huangpiao on 3 May 1869 and attacked immediately. The Miao sent a decoy party out to engage him, who then shammed defeat and ran away, luring the Chinese on to the narrow plateau. Long Weishan fell for the bait just as Deng and Huang joined him with reinforcements; Su Yuanchun was in the rear. The Miao were packed up the hillside and flanked the Chinese several lines deep, firing cannon and rolling down rocks into their ranks.

After the initial rout Long Weishan’s forces attempted to retreat, so the Miao opened up a trail to the clifftop where the Chinese were cornered and slaughtered. Long Weishan, Deng and Huang were killed and their forces thrown into confusion. Su Yuanchun was injured by cannon trying to rescue survivors but fought on until the following morning, when he managed to escape with a few score of his men. In some versions of the story, Long Weishan survived the battle but was killed when Su Yuanchun ordered him back to collect the bodies for burial at the nearby town of Shidong. 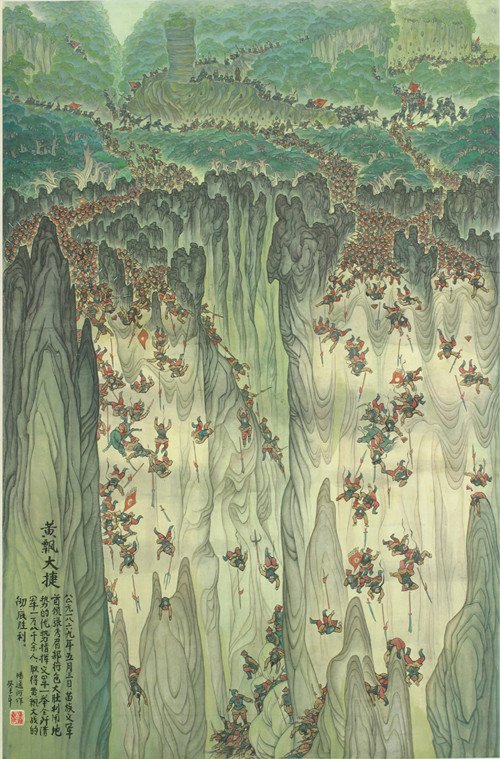 Out of the 18,500 Chinese that fought at Huangpiao, locals believe that 12,000 were killed, though the official body count was just 3000; Mesny’s estimate was 2000. The higher number is probably based on the number of battalions wiped out in the battle, whose actual personnel might not have been anywhere near their official complement (it was common practice for Chinese commanders to greatly overstate the number of enlisted men under their charge, so that they could draw pay for these “phantom” troops). The lower estimate is likely to have been closer to the numbers of bodies recovered, though in this case it’s plausible that the number was under-stated by the Chinese in order to downplay the disaster.

Not that the victors had it all their own way. In 2019 I met Mr Pan, a Miao from Chong’an, whose great-great grandfather was killed after the battle. Having mislaid his gun on his way home, he went back to look for it he was caught by Chinese, who disemboweled him and hung his head on Chong’an’s walls.

Whatever the actual number of Chinese who died at Huangpiao, Bao Dadu’s defeat of the Hunan Army set back the reconquest of Guizhou by eighteen months or more. Bao himself was shot through the thigh around this time and took no further part in the war. In late 1872, after Miao resistance was effectively ended by the battle at Wuyapo, a group of disgraced Chinese officials revived their careers by luring Bao and four other fugitive Miao chieftains out of hiding with favourable offers of surrender, only to hand them over to the higher authorities for execution. They were all tortured and beheaded.