Mesny and other Qing dynasty officials showed off their rank with – amongst other things like jade belt buckles, Buddha-bead necklaces and peacock feathers – coloured hat finials or “buttons” (帽顶), and embroidered rank badges (補子). Here’s a photo of him from around 1875, dressed as a third-rank official. 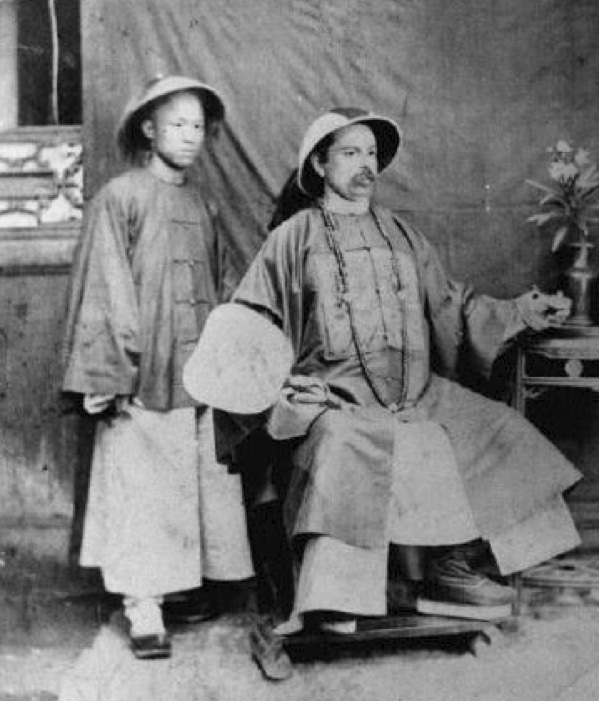 Hat finials were a coloured ball the size of a large marble, with a different colour for each of nine ranks: in descending order, they were red, pink, light blue, dark blue, clear, white and then gold, silver and bronze (though I doubt there was much distinction made between metal buttons). 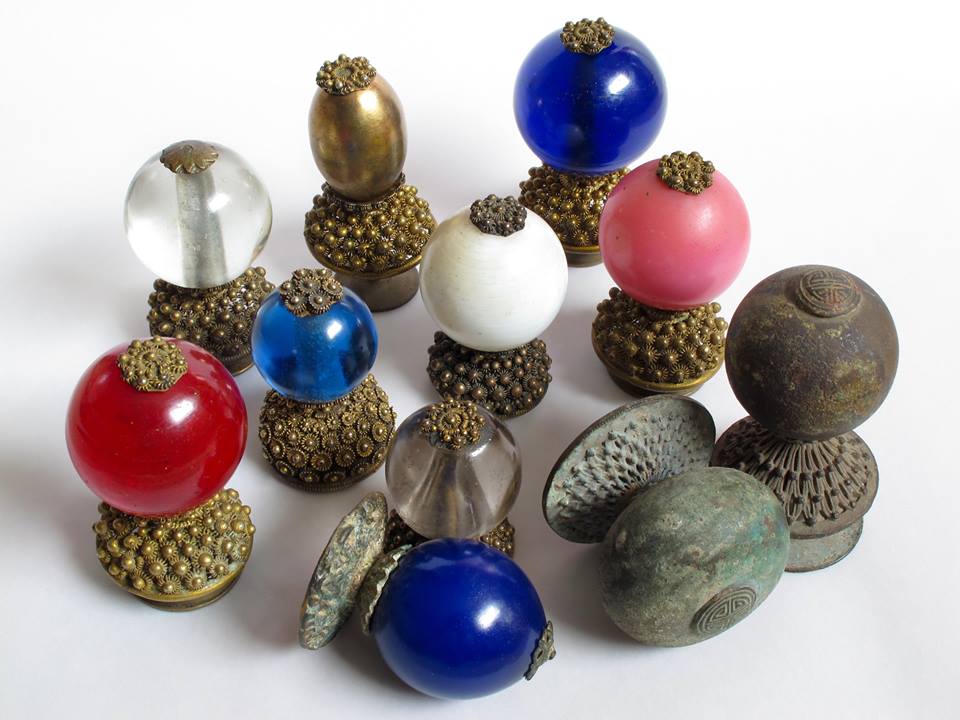 The idea of nine political ranks goes back two thousand years to the Han dynasty, and the colours correspond the Seven Treasures described in the “Great Event” (大事), a Mahayana Buddhist text dating back to around the same time: gold, silver, lapis lazuli, rock crystal, pearl, red coral and agate. In reality, finials were made of glass – sometimes hollow, sometime solid – and gilded metal.

Even back in the nineteenth century these finials, being light and easy to carry, were popular souvenirs with foreigners, and so a good number ended up overseas. If you’re looking to buy them nowadays, the rusted ones are pretty typical of what you find in Chinese antiques markets; many people buried them during the Maoist period, when any connection to the “feudal past” would land you in big trouble, so they tend to be in bad shape. You’ll still find the best examples (and prices) at auction in the UK or Europe. 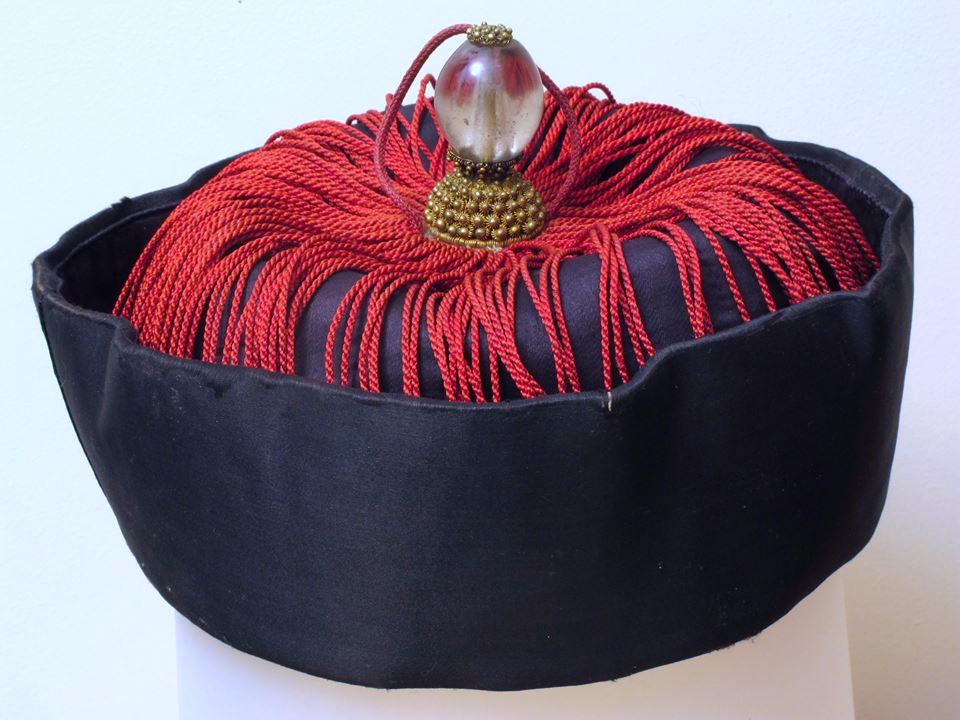 In summer, officials wore conical hats made of straw; the winter version above (冬天官帽) is made of silk and felt, with a fifth rank button in place (made of real rock crystal). The maker’s label inside says the hat was sold through a shop called Yuanyi Zhai (元益齋). This was on narrow Nanguan Street in the commercial district of Wu’an town, just west of Handan in Hebei province. The row of old shops here survived until 2013, when they was demolished in a road-widening scheme.

Rank badges were square and measured around 28cm across, and were worn on the front and back of robes (with the front one split into two panels to go either side of the robe’s opening). Designs, hand-embroidered in silk and metal thread, again varied for each of the nine levels: civil officials had a set of birds – crane for first rank, golden pheasant for second etc – while military officials had fierce animals such as lions, leopards or tigers. However, many of the creatures – the birds especially – are so stylised that it can be difficult to tell them apart. Backgrounds usually incorporate “lucky” motifs such as lingzhi fungus, red bats, and the eight auspicious Buddhist symbols. The red disk is the sun, representing the emperor; it’s on the left side of the panel for men and on the right for women (wives of officials were allowed to wear rank badges too). 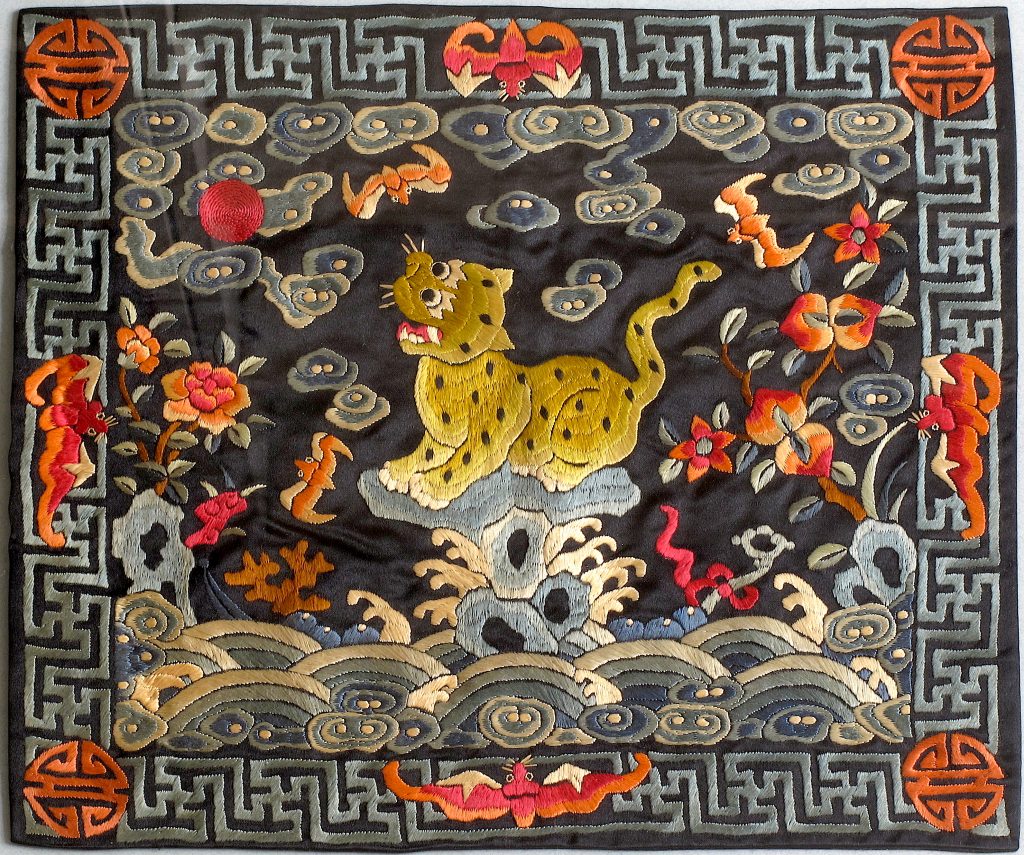 So going back to the black-and-white photo of Mesny at the top of this post, as a military official of the third rank, he would have worn a leopard rank badge along with a clear blue hat finial.