Back in 2005, I was interviewed by China Travel magazine in Hong Kong. The journalist took me out for afternoon tea at the swish Mandarin Oriental hotel, and we chatted for a couple of hours about my background as a travel writer, and in particular how I had become so interested in China. Between guzzling tea, petit fours and cucumber sandwiches with the crusts cut off, I noticed that she wasn’t writing anything down, and just assumed that she either had a good memory or was discretely recording me somehow. 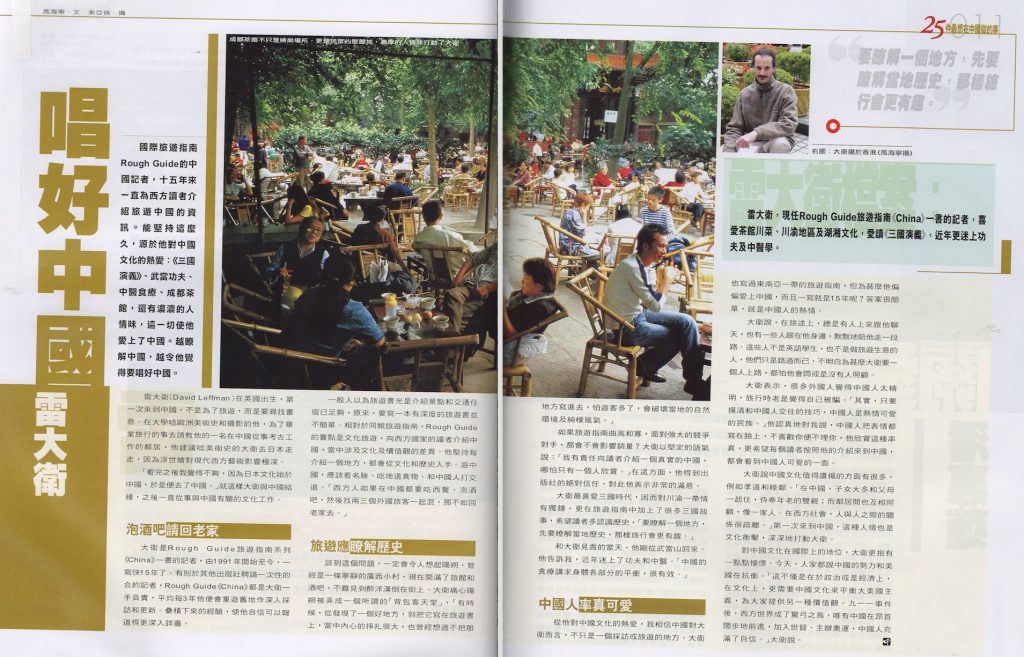 The magazine duly came out, and I was sent a copy. The article about me, “Singing China’s Praises” (唱好中国) was complete fiction. Apparently, I had spent many years in Japan studying art before realising that the Japanese had stolen all their culture from China, so then I became determined to travel to China and study everything at its source. For the record, I have never been to Japan, and certainly said nothing to the journalist about Japanese culture. The closest this article came to the truth is that my interest in what used to be called the “orient” was sparked by, amongst other things, studying Japanese woodblock printing at school.

There was one line I really liked though: “After many years of hard work, David rose to the height of his profession and won the complete trust of his employers”. It was, unfortunately, news to my employers, and they refused to give me a raise.

OK, that’s not how I got going as a guidebook writer. For me, it was rather a combination of timing, luck, naivety and, especially, bloody-mindedness. My timing was good: it was the late eighties and a decade-long travel boom was just beginning, with all sorts of opportunities opening up in the industry. I’d used a few guidebooks to Europe and Africa, and one day the idea that I could write one suddenly popped into my head. So I put together an outline and a couple of sample chapters for a guide to Australia – I’d just moved there – and sent it off to around thirty publishers. In due time I got around thirty rejections. This didn’t put me off at all; being young, naive and enthusiastic, I just thought rejections were all part of the process of becoming a writer. If I got thirty rejections nowadays, even I would realise I was doing something wrong.

But in the end I got lucky. Well, again there was less luck and more bloody-mindedness involved. One of the publishers I’d approached was Rough Guides, whose guide to Kenya I’d enjoyed and who I really wanted to work for. So every couple of months I posted off a new version of my Australia guidebook plan to them, asking what they thought. They didn’t get back. Undeterred, the next time I was in London (and much to their alarm, as I found out later) I turned up at the Rough Guide headquarters in Kennington. They admitted that they hadn’t read anything I’d sent them, and opened up a filing cabinet that was stuffed full of letters from people who wanted to write a book on Australia for them. I handed over my latest version, and told them I’d be back in a couple of weeks to find out what they thought. They gave me the job just to shut me up.

My first guidebook was the Rough Guide to Australia; then came China, Indonesia, Hong Kong and – as light relief – Iceland. Aside from Iceland (which was handed to me after the original author dropped out at short notice), I had to push hard to get the job each time, despite being the driving force behind getting China and Indonesia commissioned in the first place. Anyway, what with side projects, guidebooks for other companies and keeping all these titles up to date, I was pretty busy for the next twenty years.