In 1870, facing a collapse in morale, exacerbated by in-fighting amongst his own generals, the Sichuan Army commander Tang Jiong had no option but to abandon his eighteen-month-old campaign against the Miao at Chong’an. Mesny joined in the Sichuan Army’s dispirited withdrawal northwest from Chong’an to Weng’an along gu yidao, the old granite-flagged post road. 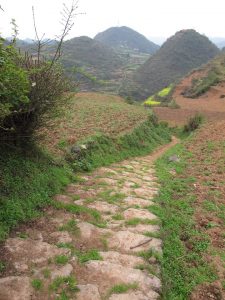 Today a stretch of the road is still intact, flagstones and all, though partly submerged under a reservoir. Fortunately for me, a friend of Mister Li – a researcher busy mapping the region’s old roads – had marked out the line of the route from Jiuzhou to Weng’an on a map for us. If we caught a boat across the water to Bodang village, we should be able to hike along the road for about 10km to Shangtang, then pick up a bus for the rest of the way. 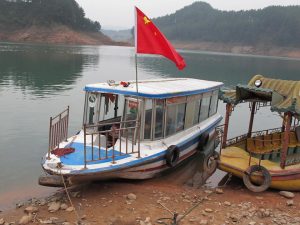 The minibus dropped us at a dock by the dam wall, where negotiation secured the services of a small pleasure boat with a canopy and plastic seats. We chugged across the reservoir towards Bodang, the vessel’s red and gold Chinese flag flapping in the breeze. Our boatman wondered where we were headed. The old road? But Bodang was on the wrong side of the lake if we wanted to walk to Shangtang. Was he sure? Yes, he was 55 now, but could remember when horse caravans still carried goods along the road all the way to Guiyang during the 1960s. There was even talk of listing the “ancient horse caravan route” as a national monument. He would set us down in the right spot – there, by those peach trees. It should take about three hours to walk to Shangtang. 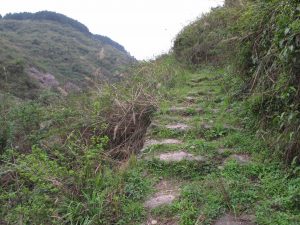 We landed on the muddy shore and there was the road as promised, a paved terrace running up into the hills, with not a house in sight. Off we went, walking in Mesny’s actual footsteps at last; the road was perhaps a metre wide and the flagstones kept clear of undergrowth, still in regular use. Out in the fields we passed a cheerful Miao family cutting away grass from an ancestral grave for the Qingming festival. “Come over and drink with us”. “Ah hoah” (I don’t drink) lied Mister Li. “Is Shangtang this way?” “Yes, you’re on the ancient road to Guiyang, just follow it”. 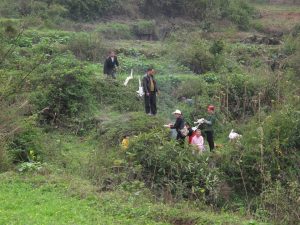 More fields, hoofprints and then, around a corner, two horses grazing on the road, bells clanking. The road was very dusty; in wet weather the granite flags would be muddy and very slippery. In the old caravan days, unshod horses had a firmer grip in the rain, but their hoofs split and rotted, whilst fully-shod ponies skidded and fell continually. Some muleteers compromised and shod just the front hoofs. 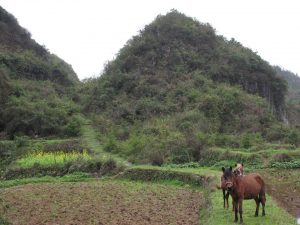 The trail snaked across the countriside and around small conical hills, over a splendid arched bridge in the middle of nowhere, and up a broad flight of steps. Then, about two hours into the hike, the flagstones vanished abruptly at the village of Xia Banqiao. A road crew told us that the rest of the old surface had been dug up years ago, though the new vehicle road still followed the same route to Shangtang. Disappointed, we trudged on, the town soon visible at the far end of a flat, open valley. 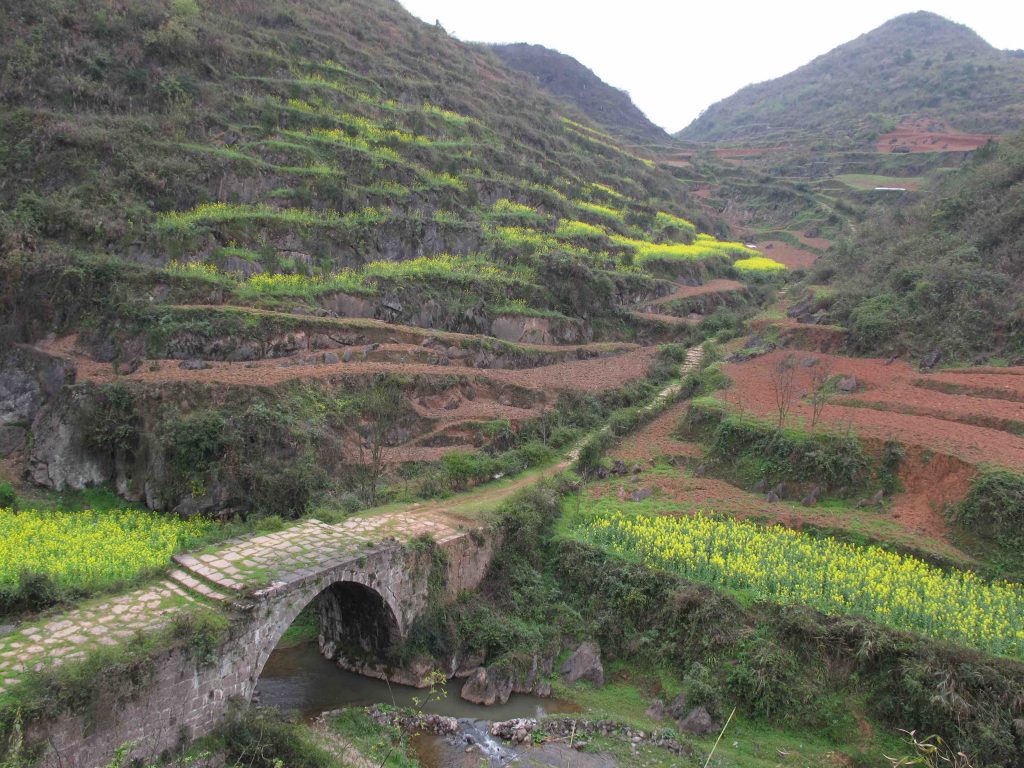 Shangtang was the site of the Sichuan Army’s mid-point camp between Niuchang and Jiuzhou; the modern incarnation proved to be an under-populated couple of streets with a good deal of construction work going on. As ever, nobody was sure about the bus schedules – there was another bus today, there wasn’t, there’s one every few minutes, there were only two a day. In the middle of this routine a bus pulled up unexpectedly, but the driver decided that he wasn’t going any further. We tried to hire a minibus, but that was too expensive. Mesny often griped about delays in arranging fresh transport – porters and horses in his case – at every town. A man came over to watch me writing in my notebook. “English letters all look the same.” The minibus driver’s wife wandered over smiling, looked at my feet and said “Size 45, right?” 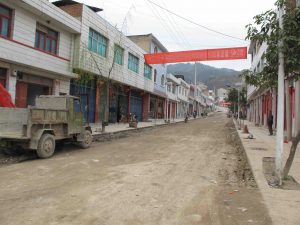 Eventually a bus materialised, people piled in and we set off on the bumpy run, little stretches of undemolished, overgrown flagstones occasionally appearing alongside the gravel verge. At one point I overheard a fellow-passenger telling a friend: “This is sha ren gou, Slaughter Men Gully, where robbers used to ambush caravans in the old days. If they didn’t have anything worth stealing, the bandits would kill everyone”.