Here’s another narrative print from Wuqiang – the story of Yue Fei. As mentioned in an earlier post, Yue Fei (1103–1142) was a patriotic Song-dynasty general who fought against the invading Jurchen (Jin) armies, precursor to the Mongol hordes who would later overthrow the Song and occupy all China.

Ironically, it was Yue Fei’s success on the battlefield that led to his execution. The Jurchen had captured emperor Qinzong and his replacement, Gaozong, feared that if Yue Fei defeated the Jurchen and rescued his older brother, he would have to give up the throne. On the point of recapturing the old Song capital, Kaifeng, Yue Fei was recalled from the battlefield, falsely charged with treason and executed. His reputation was restored twenty years later by emperor Xiaozong, and a grand tomb – flanked by kneeling iron statues of the officials who falsely denounced him – built for him at Hangzhou. In martial circles, branches of Eagle Claw kung fu and Xingyi consider Yue Fei their founder.

Anyway, this large woodblock – around 70cm wide and 50cm deep – tells the story of his early years. It’s divided in to four numbered panels sequenced top left, top right, bottom left, bottom right; confusingly, each panel is read in the opposite direction, top right, top left etc. I wonder whether it was meant to be cut into quarters and bound as a book, and I guess that it was only the first in a series of woodblocks illustrating Yue Fei’s complete career. According to a signature, it was printed by the otherwise obscure Yixing Studio of Wuqiang town. 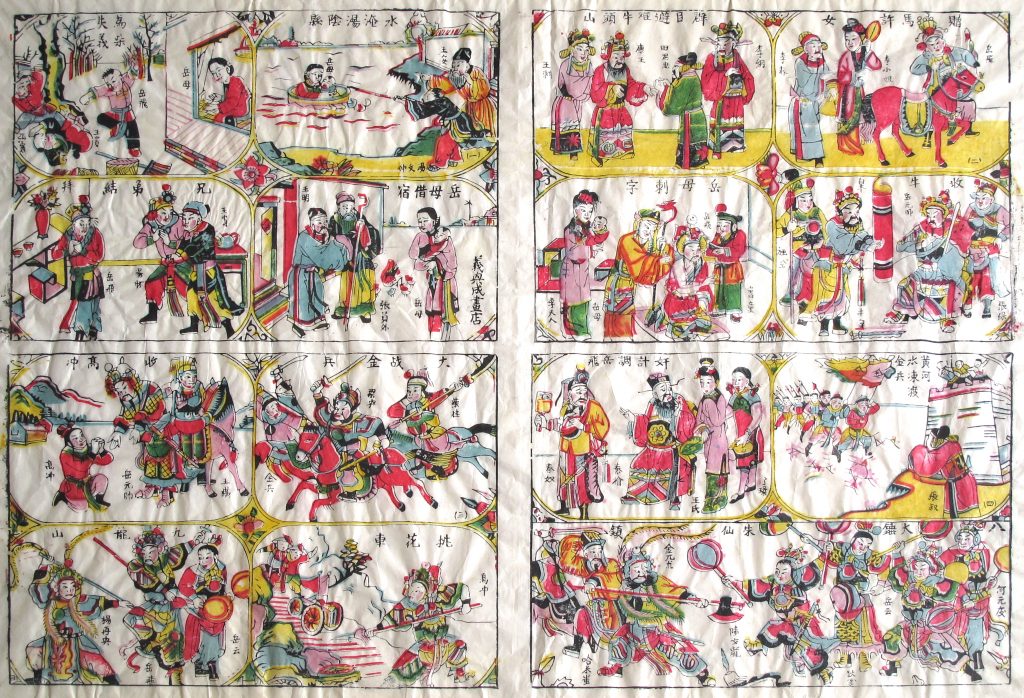 There’s a lot going on here. In brief, panel one shows an infant Yue Fei and his mother being rescued from a flood by Wang Ming and Squire Zhang. As a youth, Yue gets in to a fight with Zheng and Xiao Li, and later swears brotherhood with Tang Huai and Wang Gui.

In the other panels, Yue Fei is betrothed to Miss Li, and is given a horse; he also befriends Niu Gao, who himself became a famous general. Yue Fei’s mother has her son tattooed with the four characters for “Serve the Country with the Utmost Loyalty”. Various campaigns are shown, including Jiulong Mountain and the victory at Zhuxian (see my earlier post on woodblocks from Zhuxian). Meanwhile, one of Yue Fei’s detractors at court, Tai Gui, spreads scurrilous rumours about him.

Yue Fei’s biography was written not long after his death, and his story soon became the stuff of folklore. A thousand-page Qing-dynasty novel of his life by Qian Cai was translated into English by T. L. Yang and published in Hong Kong in 1995. Though copies go for ludicrous sums online, I managed to pick one up recently for HK$188 (thank you Flow Books), so keep looking… 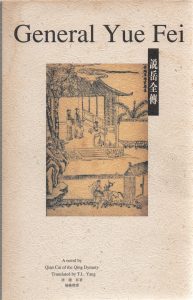