As mentioned in the previous post, Zhuxian’s woodblock prints illustrate a range of subjects, often carrying a hidden message. Some themes would be familiar to Chinese across the country, others utterly obscure to all but locals. Here’s a good one to kick off with. 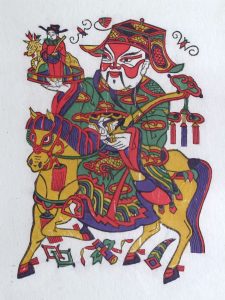 The two insect-like creatures buzzing around the rider’s hat are in fact red bats, hong fu – a pun on the similar-sounding words for “abundant good fortune”. The rider holds a tray in one hand, on which sits a deer, lu, a pun on the archaic term for “an official’s salary”. The association with official rank is reinforced by the model of a Song-dynasty magistrate standing beside the deer, and the rider’s robes, which are those of a high-level bureaucrat.

The rider also holds a ruyi, a magic wishing-wand, and the things under under the horse’s hoofs are three of the eight auspicious Buddhist symbols. Finally, the rider is on horseback, ma shang – which is how you say “quickly” in Chinese.

So, the title of this print could be: “Wishing for the Speedy Arrival of Abundant Good Fortune, Wealth and Official Position”.